‘The Los Angeles Philharmonic’s multimedia presentation of Edgard Varèse’s Amériques launched the new in/SIGHT series at Walt Disney Concert Hall. The presentation of Amériques is accompanied by Refik Anadol’s site-specific architectural video installation, which was developed to illuminate and enhance the Varèse’s composition and to activate the architecture of Walt Disney Concert Hall. The dynamic visual program created by Anadol uses custom-built algorithmic sound analysis to listen and respond to the music in real time, using architecture as a canvas and light as a material. Additionally, the movements of Salonen, as he conducts, will be captured by next generation Microsoft Kinect hardware and 3-D depth camera analysis to inform the visuals displayed. The result was a powerful and immersive experience for the audience that engaged their visual and auditory senses.’

Launching in/SIGHT – the LA Phil’s groundbreaking series of concerts with video – this program embodies the vision of the New World as a place of unlimited artistic freedom. Amériques was the first musical piece that Varèse composed upon coming to New York and this project is fittingly the first site-specific audio-visual performance that I produce in the U.S. I approached this collaboration from the standpoint of a non-linear and ephemeral interaction between Salonen, Varèse, and me, and hope that I will be able to transform Varèse’s timeless musical fiction into an immersive visual medium through which a new kind of storytelling will occur. Rather than approaching this medium as a means of escape into some disembodied techno-utopian fantasy, this project sees itself as a means of return. It aims to facilitate a temporary release from our habitual perceptions and culturally biased assumptions about being in the world, and to enable us, however momentarily, to perceive our own stories and the stories around us freshly.
In a recent interview with the Huffington Post, Anadol stated regarding this work, “ By highly inspiring from visual music and expanded cinema research, instead of creating a media screen, there will be a story inside the space. What happens if you add a video layer that speaks to the audience in a whole new experience? We’re exploring the boundaries of what is real, what is physical, what is virtual…”

Finally, I would like to sincerely thank everyone who made this project possible. This project would never have been possible without the tremendous and generous support of Los Angeles Philharmonic, President and CEO Deborah Borda; Vice President of Artistic Planning Chad Smith; Artistic Administrator Meghan Martineau and Concert Operations Manager Taylor Saleeby. I would also like to thank for their open-handed support the University California, Los Angeles, Department of Media Arts’ faculty members, Microsoft Research, and Lili Cheng, Finally and specially I would like to thank Frank Gehry for his dreamful canvas and Esa-Pekka Salonen for his open-minded collaboration with me to discover “New Worlds”. 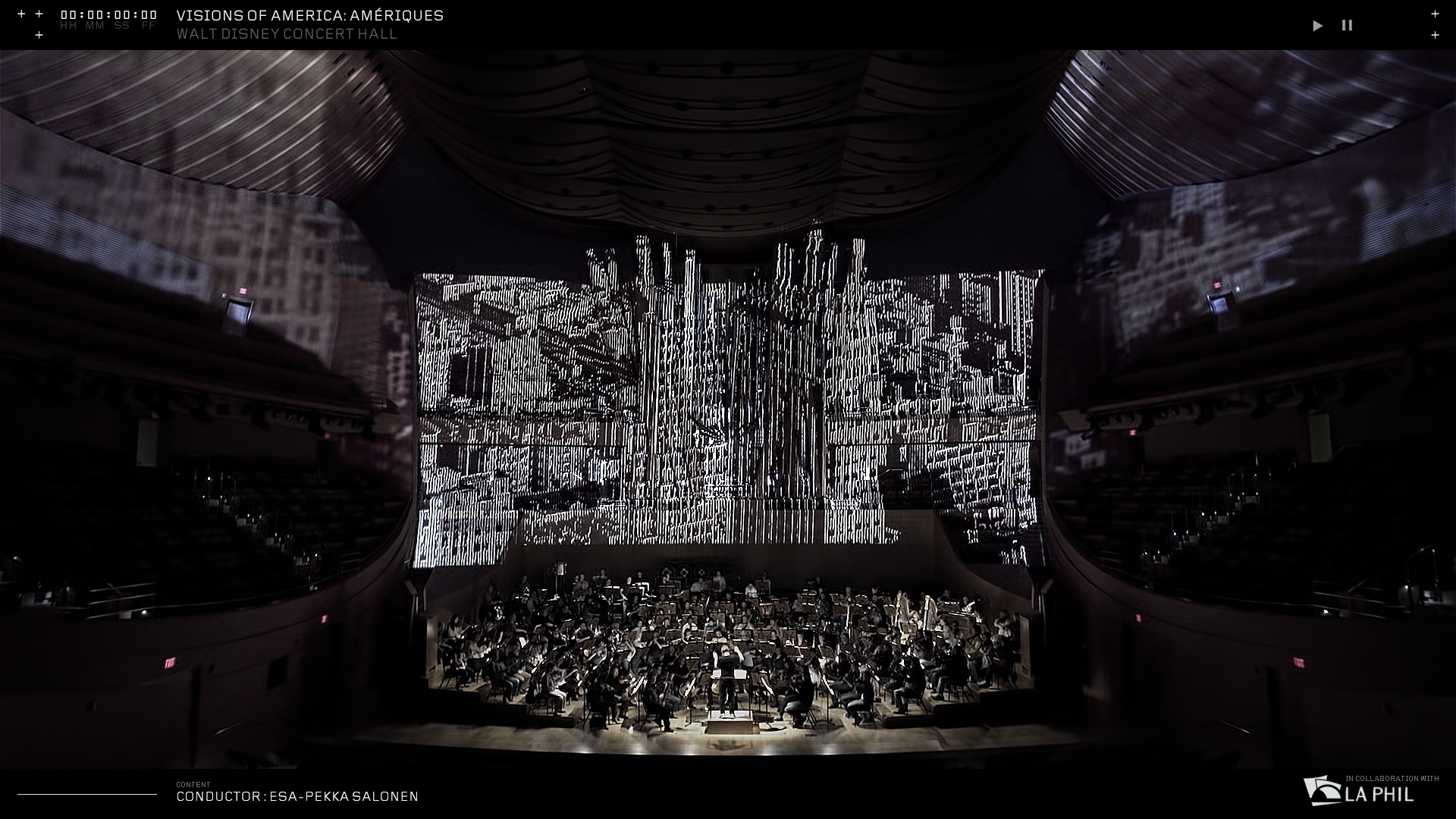 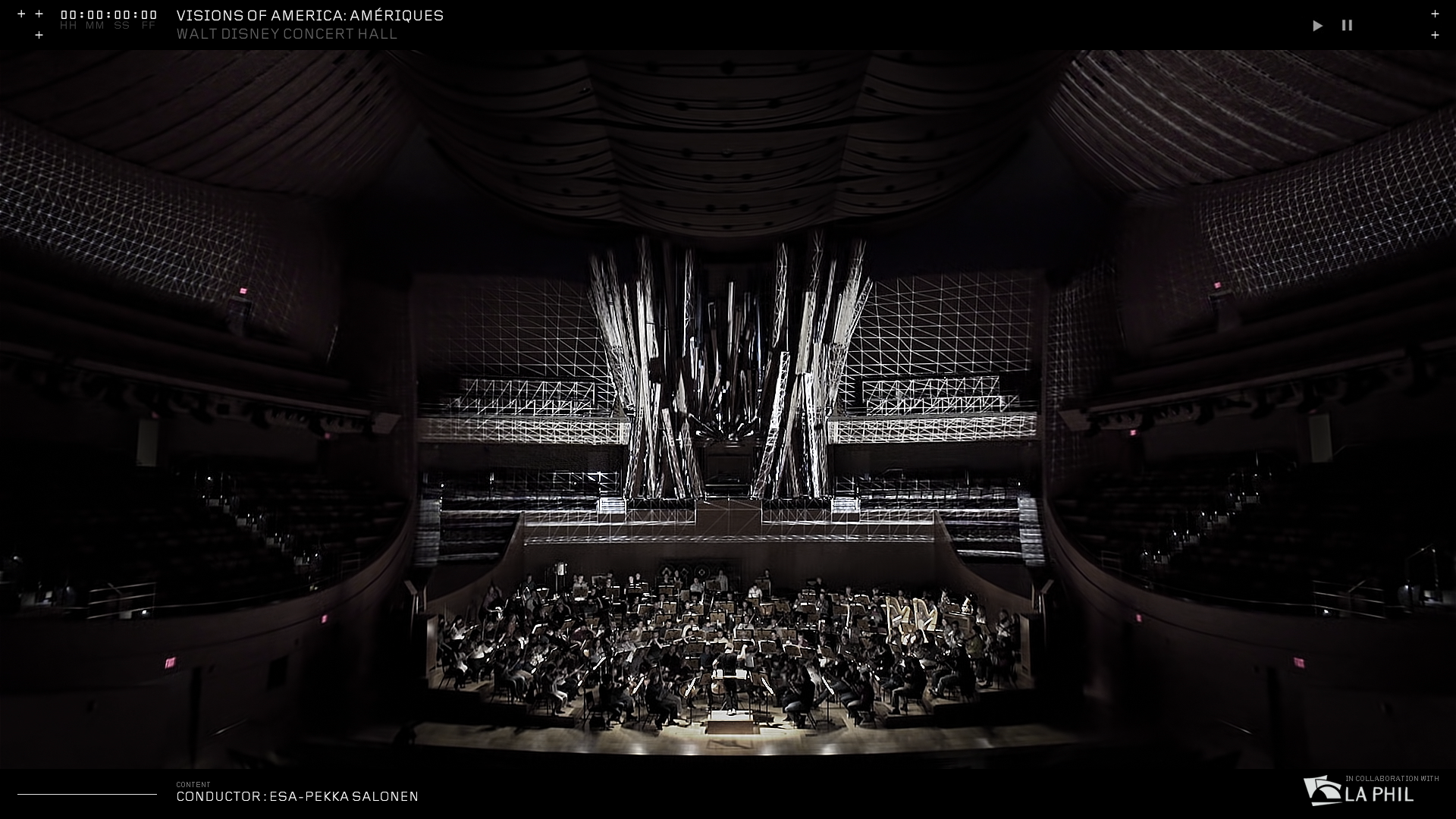 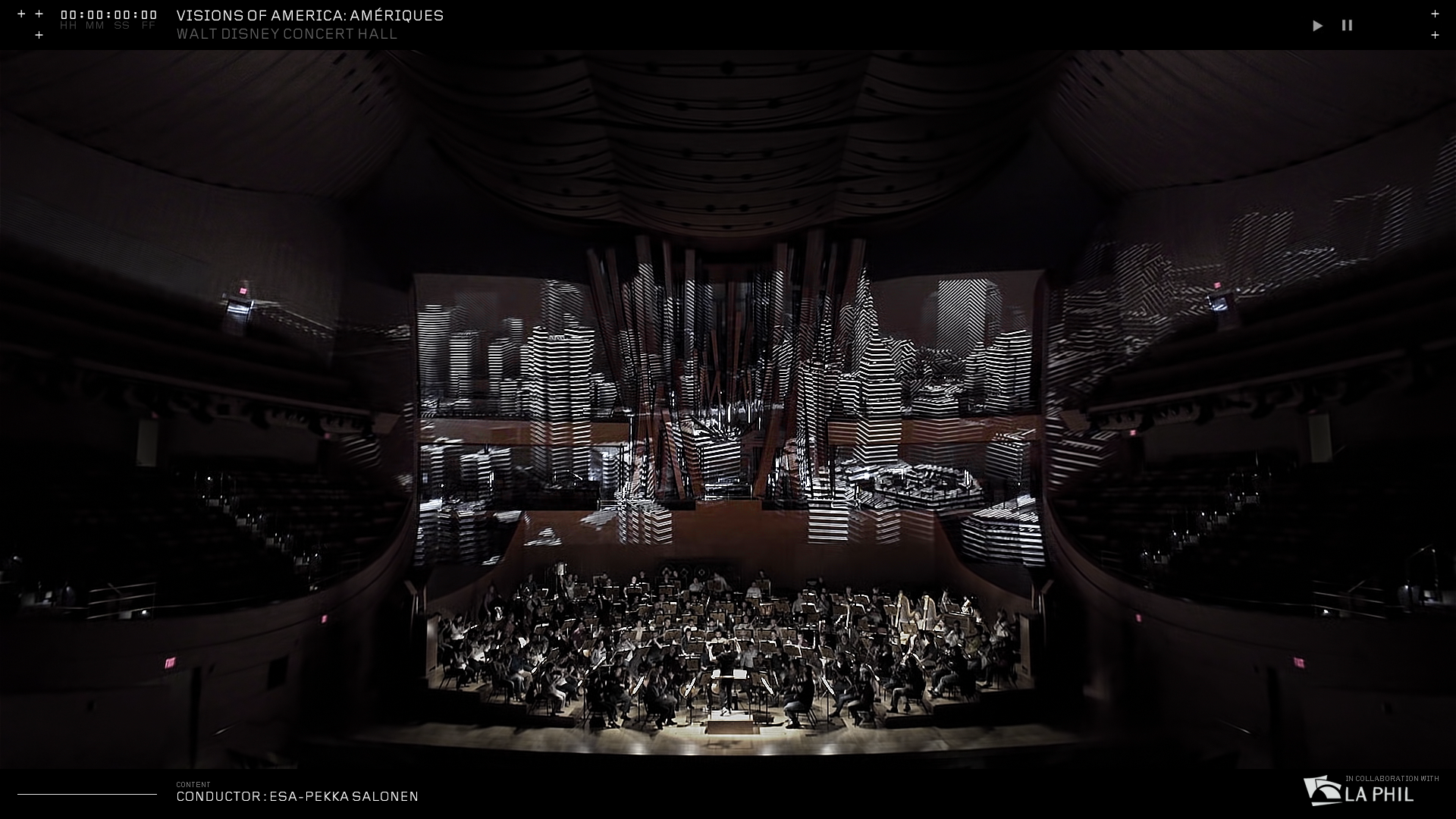 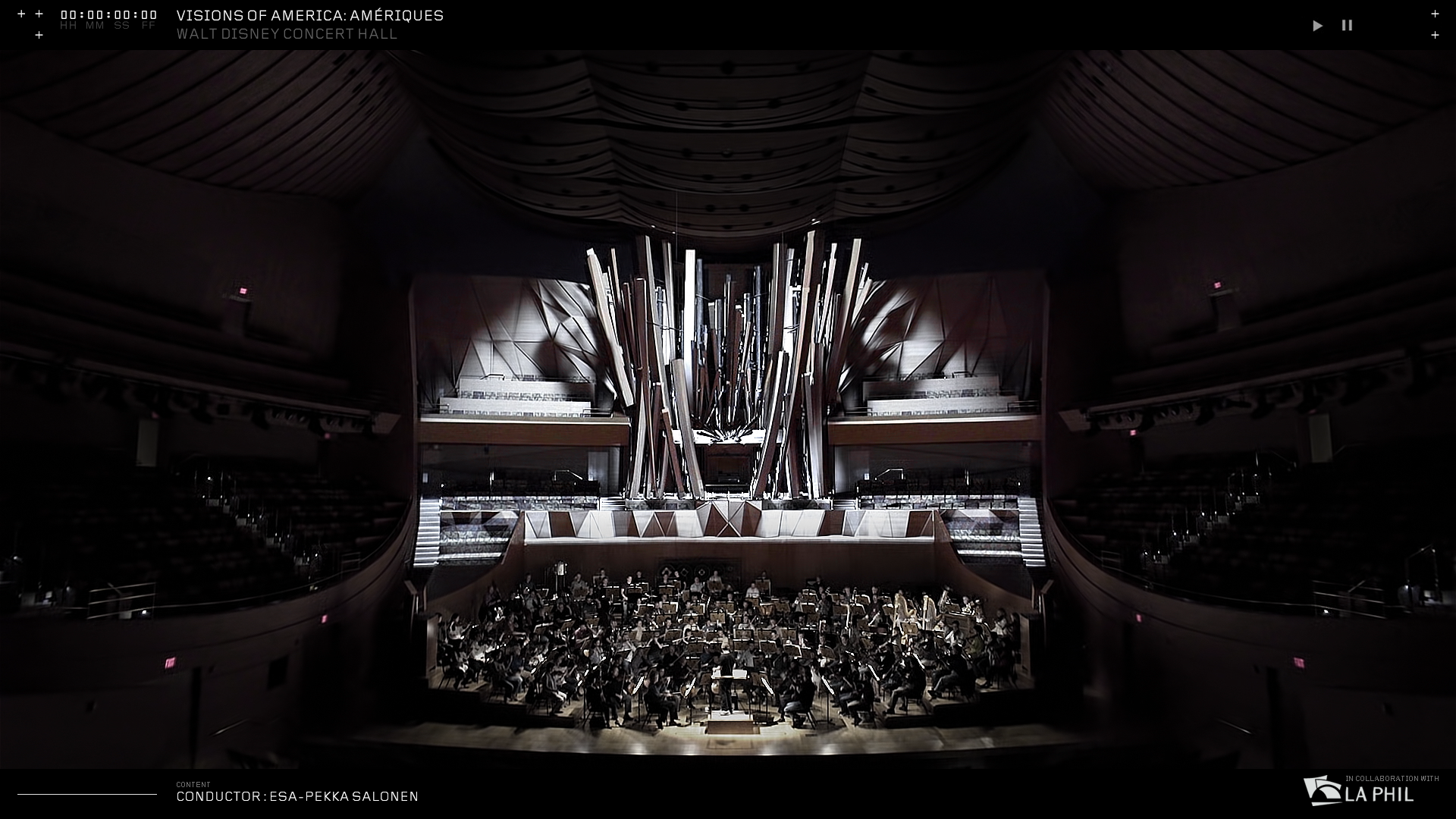 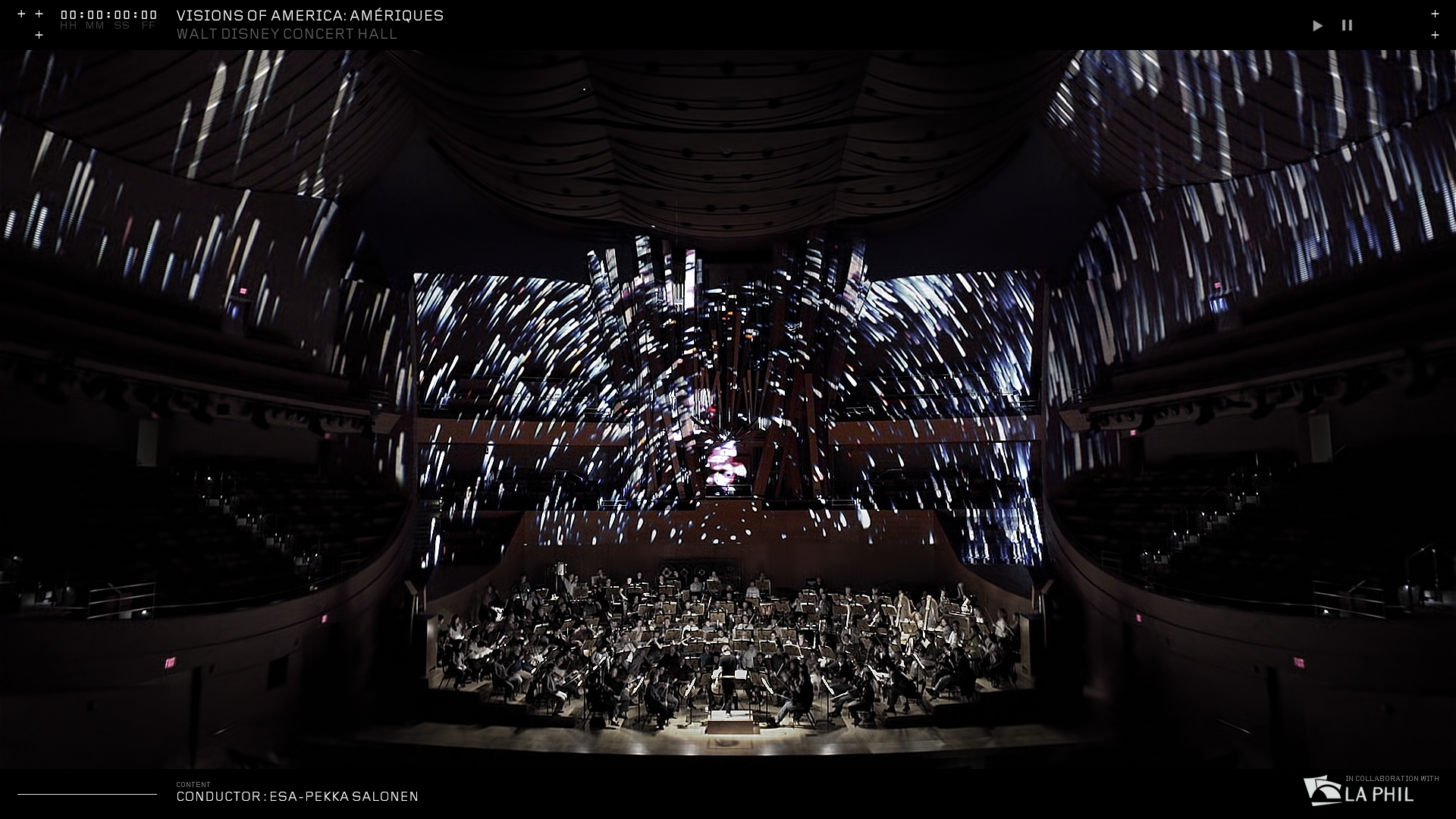 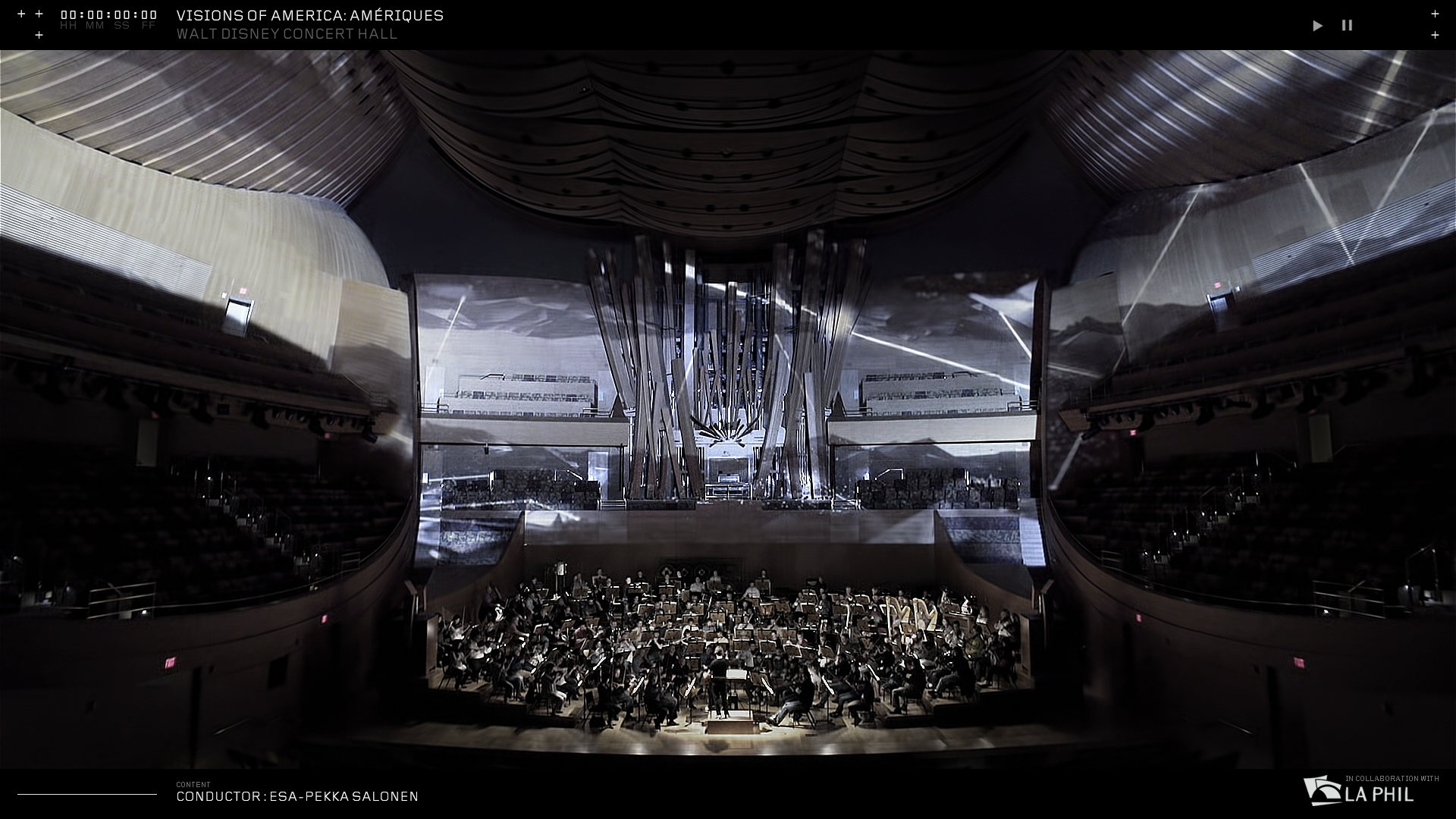 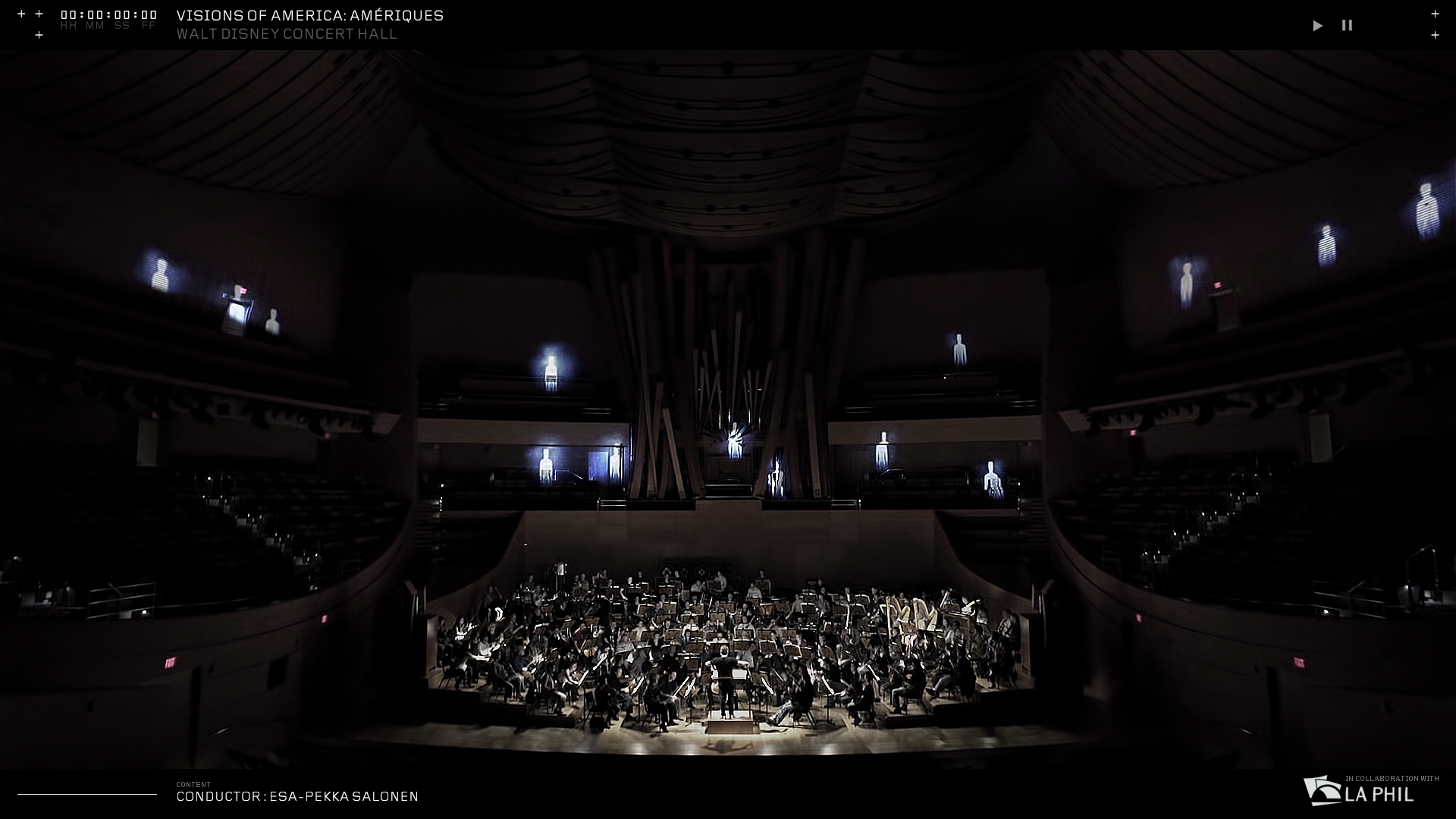 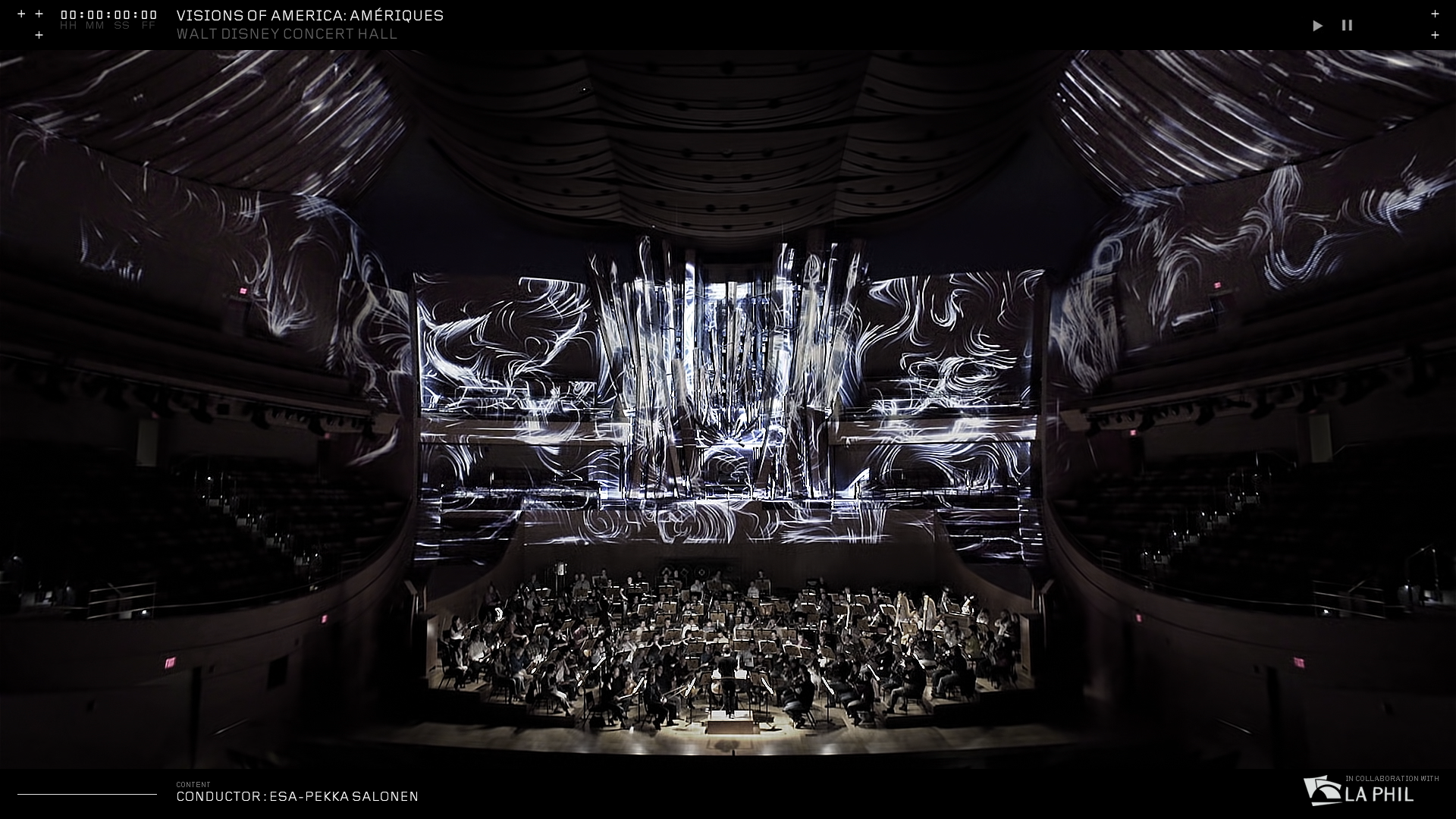 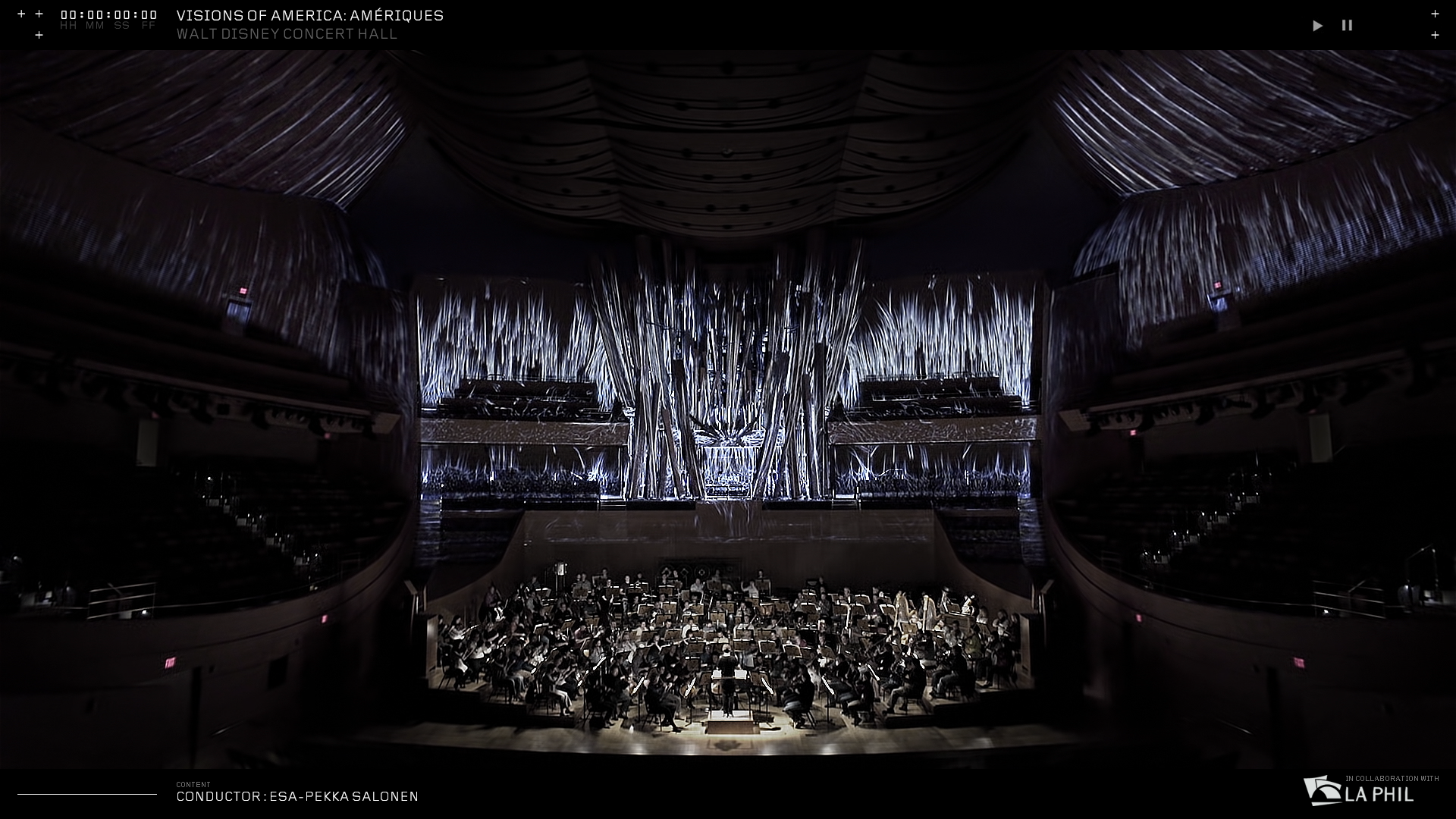 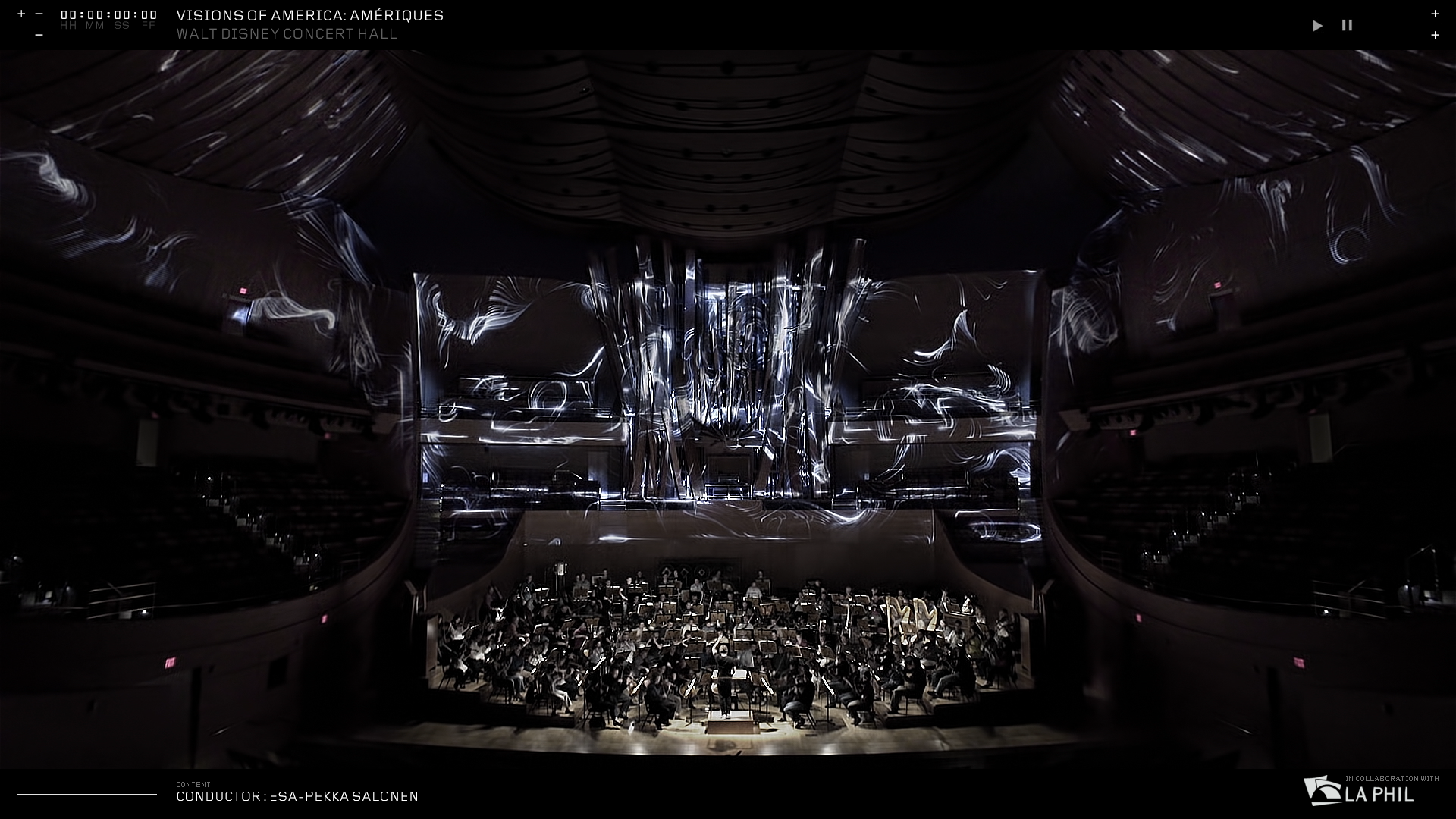 Next:
Convergence LA
Next Project